Animal welfare has been found to be of paramount importance and given high priority by UK livestock markets, results from an extensive survey by the Humane Slaughter Association (HSA) has revealed.

Commissioned by the Livestock Auctioneers Association (LAA), in collaboration with RSPCA, the independent survey covered a representative sample of 24 livestock markets across England and Wales, with the aim to evaluate current welfare provisions, identify any areas of concern and to recommend future improvements.

With a primary purpose to provide a ‘snapshot’ of animal welfare at UK livestock markets in the 21st century, the survey compared results to a similar Defra-funded study of 24 livestock markets by the HSA and the Royal Veterinary College (RVC) between 2005 and 2007.

Key findings from the new survey include

The report highlights the developments and improvements in management procedures, handling equipment and infrastructure which have taken place since the previous survey.  Improvements in facilities have been recorded in multiple zones across the markets for both cattle and sheep species.

The survey reports a 64% increase in protection from jumping injuries for adult cattle in unloading pens, and 57% for sheep in comparison to the 2005-7 figures. Similarly, protection increased at gateways (21% cattle and 29% sheep) and with general penning, with a 32% increase with adult cattle and 46% with sheep. More vehicle reception areas are escape proof for both adult cattle (18% increase) and sheep (21%).

Improvements were also recorded in the absence of bruising and contact points in unloading pens, gangways and grading/sorting/ID areas. This has included improvements to aspects relating to human safety, including raised platforms in cattle grading/weighing/ID sections, with gates controlled from above the animals, rather than at floor level. The presence of these features increased by 17%.

Sheep facilities have improved with the addition of drafting gates, a 15% increase, making sorting the animals easier and reducing the stress for both animals and staff.

Aside from the facilities and features, all the markets in the survey are part of the Red Tractor Assurance Scheme. The scheme has an animal welfare policy, implemented by written supporting documents, which includes training records and procedures for dealing with emergency situations such as escapees and injured or infirm animals being delivered to the market.

Crucially, the future of animal welfare in livestock markets is being further safeguarded with the introduction of additional safety and security measures, alongside dedicated training and development procedures.

Examples include the introduction of the ‘Safe Hands’ Master Drovers Programme, developed by Animal-I at the request of LAA, in co-operation with AHDB. The drover training modules provide a series of units covering handling, animal welfare, health and safety and market requirements, enhancing existing practices.

The HSA also provides an annual lecture on animal welfare in livestock markets to students on the LAA’s ‘Livestock and Market Operations and Management’ course at Harper Adams University.

Technology is also playing its part, with 50% of the markets in the survey using CCTV coverage in animal areas as part of their commitment to animal welfare and to enhance security.

Chris Dodds, executive secretary of the LAA comments, “This independent, comprehensive and representative study clearly demonstrates the high priority given to both animal welfare, but also the safety and security of staff and visitors to the livestock market.

“At a time when the entire livestock industry is facing false and misleading claims in terms of sustainability, traceability and welfare, we are pleased that this independent research demonstrates that we are maintaining best practice and enhancing quality and safety standards.”

He adds, “We do not rest on our laurels, and continue to work with partners and other stakeholders to help develop and improve safety and welfare measures. This may be by means of new technology, new techniques or additional training support, but our commitment remains to make the livestock auction market the safest environment for both livestock and human welfare.”

Co-author of the report and HSA technical director Charles Mason adds, “Livestock markets currently play an important role in setting a competitive value for breeding-, store- and slaughter-stock.  They also provide opportunities for vendors and buyers (of animals which may not meet the strict fat and conformation requirements of major retailers) to market and procure livestock of their preference, thus reducing the likelihood of financial penalties.

“The most important features of livestock markets, from the animal welfare point-of-view, are the staff.  This survey showed a commitment to selecting, assessing and training suitable staff for animal handling.  Some rough handling was witnessed during the survey but, in each case, market employees were not involved.  No serious animal welfare concerns were seen or raised during the survey visits; however, there were some minor incidents witnessed and these were dealt with quickly and effectively, following the written procedures in the respective markets’ handbooks.

“The results of the recent survey are very encouraging and reflect the progressive efforts of 21st century livestock market operators, and the Livestock Auctioneers’ Association, to safeguard the welfare of animals in their care.  Of particular note were a number of innovative handling features which, ideally, should be included in plans for new livestock handling facilities, whether they are for markets, lairages or farms.”

Download Livestock Markets 200 years on
Back to Research & Reports 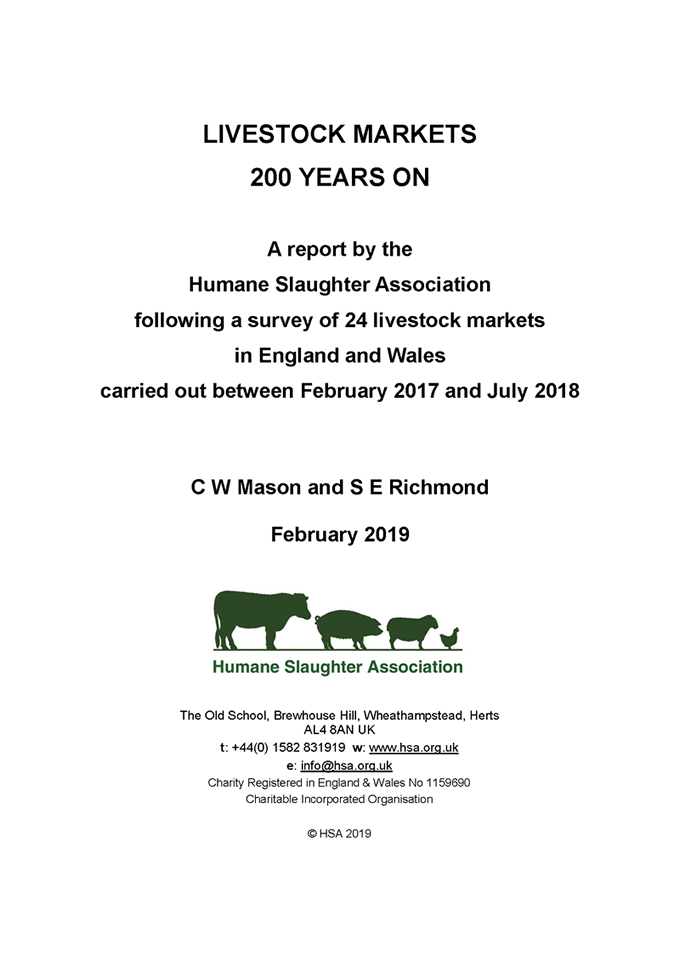