Turnover across all species through the livestock auction mart system in England and Wales has smashed through the £2 billion barrier for the first time, with growing numbers of producers and buyers recognising the importance of the live sales ring to secure both a fair trade for vendors while meeting buyer requirements.

At a time when integrated supply chains are coming under greater scrutiny, particularly in the pig sector where contracts have effectively been ripped up when the trade collapsed, even more pressure has been placed on the beef and lamb trade through direct contracts.

While prices on forward contracts have not risen to reflect increasing production costs and lack of numbers, the live sales system has remained resilient and transparent, working on behalf of farmers to get a fair trade on the stock sold through the ring.

“The live sales system is working on behalf of not only the producer, but also the retailer and the consumer, by ensuring quality, home-produced red meat has been available despite all the challenges through both Brexit and the global pandemic,” explains Chris Dodds, Livestock Auctioneers’ Association (LAA) executive secretary.

Despite a slight reduction in slaughter stock figures across all species, although negligible against the overall drop in the national kill and deadweight figures, numbers have remained strong, particularly within Wales with an increase across all species other than pigs, although pig numbers remained consistent from 2020 figures.

Store and breeding stock numbers followed a similar pattern in 2021, with a slight drop in cattle and sheep numbers through livestock markets in England, while again Wales recorded a slight jump in both categories, and a sharp rise in calf numbers.

Crucially, despite the lower numbers, markets saw a huge increase of over £267 million, to break through the £2 billion turnover barrier for the first time. Overall the markets generated a turnover of £2,082,317,000.00

“Trade has been buoyant throughout the year for all types, while at the same time we have seen forward contracts and integrated supply chains fail across the agricultural sector,” adds Mr Dodds.

“Supply and demand are key to everything, and when there has been a global lack of sheep meat worldwide, for example, the markets need to adjust accordingly. The dynamic nature of the live sales system allows us to react as an industry, working on behalf of the farmer to secure the best price for their stock.

“The past two years re-emphasised the importance of the live sale ring, providing a platform for farmers to present and sell their stock at a fair market price,” he says.

In 2021, this has been particularly seen in the finished lamb market, where on numerous occasions the live prime lamb price has been superior to its deadweight equivalent. On several occasions, deadweight firms have attempted unsuccessfully to reduce the farmgate price.

“We have shown the true worth of the live sales system, and we have seen a lot of deadweight stock come back to the market, with producers picking and choosing between marketing systems for their best stock,” continues Mr Dodds.

“Our strength lies in the fact that we provide a marketplace for all classes and species, unlike buying groups who may for example select the 10 calves they wish to purchase, leaving 20 unsold. Through the market you are able to sell the entire stock.”

Mr Dodds concludes, “Despite the dual challenges of Brexit and a global pandemic, the livestock markets of England and Wales have maintained competitive trade throughout, and this has been reflected in the record prices achieved.” 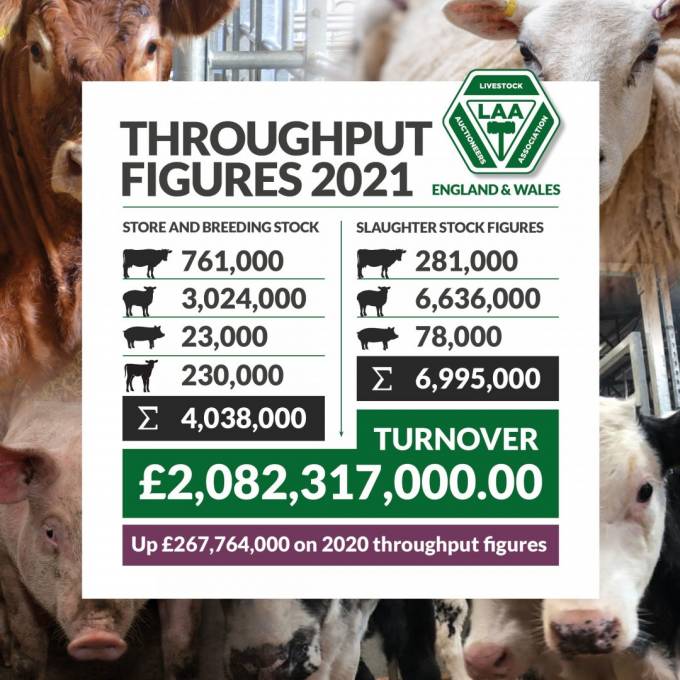