A popular and well-deserved recipient of the Lifetime Achievement Award, Livestock Auctioneers’ Association (LAA) executive secretary Chris Dodds has done more than anyone over the last 20 months to keep livestock markets open for business despite the dual challenges of Brexit and a global pandemic.

Having helped position the LAA in a place that has both influence and the ear of the Governments in both London and Cardiff, as well with Defra and other industry stakeholders, Mr Dodds has acted tirelessly on behalf of the industry, ensuring the live sales system was able to remain open throughout the various restrictions faced across the country.

Ironically, Mr Dodds career as executive secretary with the LAA, starting in 2002, seems to have been interspersed with continual issues with disease, from the 2001 FMD outbreak, to the 2007 FMD leak from a Government laboratory, the 2008 Bluetongue outbreak and the subsequent roll-out of vaccines, and Avian Influenza all having an impact, requiring a resilient approach to steer the industry during such challenging times.

More recently it has been Covid-19 that has presented the bigger challenge, but as Mr Dodds explains, “Compare this pandemic against the outbreak of foot-and-mouth disease in 2001, when markets were closed, and stock prices completely collapsed. This time the trade has stayed strong, creating a confidence that would not have been there, had the marts closed.”

Mr Dodds is justifiably proud of his achievements to date in post as LAA executive secretary, but his first association with livestock marts started at a young age, growing up on the family farm in Northumberland.

The farm specialised in dairy, predominantly Guernsey cows with some Holstein/Friesian, while a young Mr Dodds would also spend summer holidays working on farms during silage and hay making, with Easter holidays spent working on upland sheep farms. During this time he spent more and more time at Hexham mart.

There was perhaps then some inevitability that his first career move would be within the livestock auction mart environment, starting a 6-month work experience placement at Hawick Auction Mart in the Scottish borders, back in 1980.

After a two-year period working for Leamington Spa based John Thornborrow & Co, specialising in pedigree livestock, but especially dairy, Mr Dodds returned to work at Hawick Auction Mart in 1982.

In 1990, Mr Dodds went on to manage Chelmsford Market, before he was invited to manage Penrith Market for Penrith Farmers & Kidd’s in 1992, a position he held until invited by the LAA Council to join as their executive secretary in 2002.

“The live auction system remains the only route to market that works for the vendor, rather than the buyer,” he adds.

Notable achievements since he took post has been the introduction of the Livestock Market Operations and Management course at Harper Adams University, alongside the development of a drover training course for all personnel involved in the movement, sale and management of livestock in markets.

Mr Dodds was also a key figure in establishing the UK Livestock Brexit Group, now re-named as the Livestock Chain Advisory Group. He continues to chair the group which consists of 24 industry trade bodies, representing the wider interests of the UK livestock sector. He has also served as president of EALM, the European trade association for livestock markets.

During his tenure at the LAA, Mr Dodds has also been actively involved with the Prince’s Countryside Resilience Fund, the programme launched by the Prince of Wales in 2016 to offer support to family farm businesses across the UK.

He says, “Being involved with the Prince’s Countryside Resilience Fund has been an honour. Several markets have established valuable health drop-in centres on their market sites, and the LAA is working to help all of our members to provide similar facilities. The work is on-going.”

Indeed, the work of the LAA is on-going, as it supports the competitive open forum that the live sales ring facilitates, ensuring that livestock markets remain the leading marketing system throughout England and Wales.

Having celebrated the 200th anniversary of the first recorded auction mart in 2017, the livestock markets of England and Wales remain in safe hands under Mr Dodds’s stewardship. 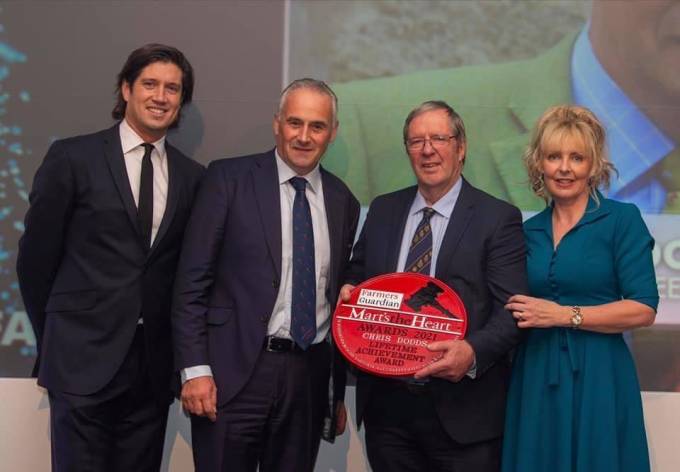