LOVE FOR THE COUNTRYSIDE AND A HELPING HAND FROM ‘AUCTIONEERING LEGEND’ LEADS TO FLOURISHING CAREER FOR NEW AUCTIONEER OF THE YEAR, DREW PATRICK

It has been a sharp rise from growing up in Pembrokeshire to becoming head store lamb and cast ewe auctioneer at Hexham Auction Mart. So how did New Auctioneer of the Year winner, Drew Patrick, find himself moving from West Wales to his flourishing career in Northumberland?

The simple answer is by truck, a little luck and some helpful advice from an ‘auctioneering legend’ along the way.

Originally farming in Herefordshire, Drew’s family moved to a bigger farm in Haverfordwest in 1997.  At the time, Drew’s father was also a livestock haulier, specialising in pedigree bull haulage, covering sales around the Carlisle, Perth and Stirling areas. Joining his father on the regular collections at livestock markets, Drew soon picked up the ‘mart bug’.

It was through these visits that a family friendship developed that played a pivotal role in the direction of Drew’s future career. The late David Thomlinson, who sadly died following a farm accident in June, was instrumental in helping Drew onto the first rungs of the auctioneering ladder.

“I had completed my Agriculture degree at Harper Adams University, and had taken on a job at a beef abattoir,” explains Drew. “I was not really enjoying it, and was looking at ways of getting into the auctioneering industry. It was David that really encouraged me and suggested to give it a go when an opportunity arose at Hexham. He really acted as a mentor and role model for me.”

Familiar with the area, having completed two lambing stints during his college days, Drew has embraced life in rural Northumberland. Starting as a trainee in 2015, he now heads up the store lamb and cast ewe sales, is prime and store cattle auctioneer and also sells a few pedigree cattle with Hexham and Northern Marts.

Covering a huge area across the North of England and Scottish borders, Drew insists communication and trust is key to achieving best results for both buyers and vendors.

“I get out on farm, helping farmers select stock and giving advice. I also relay that crucial information to the buyers. It is all about trust. Buyers will trust you if you are honest with them, and you have to earn the trust from farmers that you are marketing their stock in the best possible way,” says Drew.

28-year-old Drew, who married partner Emma in July this year, sees a bright future both from a personal perspective, and for the livestock market system.

“I believe there will always be an important role for livestock auctions, there is no substitute for seeing animals first-hand. Buyers need to buy the right stock for specific requirements.”

On the personal front, Drew and Emma would eventually like to have their own smallholding for their sheep, also allowing Drew to follow up on his passion for showing livestock.

On being named New Auctioneer of the Year, Drew says, “It was a shock to be nominated by my clients and the farming community, and a massive honour to be recognised for the work that I do.”

Chris Dodds, executive secretary of the Livestock Auctioneers Association adds, “Drew has shown a strong passion, and has also taken on-board invaluable advice to reach his current position. Congratulations on this well-deserved recognition.” 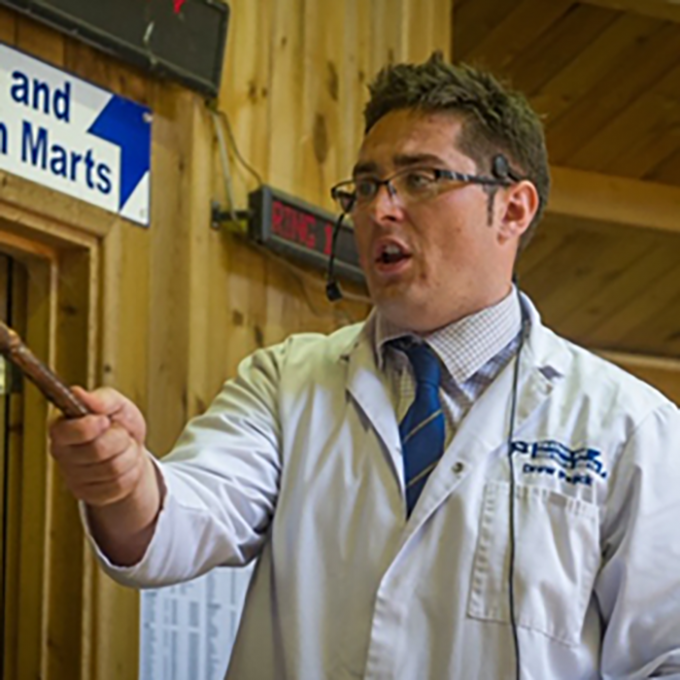