A passion to lift the profile of sheep sales, and increase throughputs, are key factors behind Russell Steer being named Livestock Auctioneer of the Year 2018.

Russell, a Kivells’ director, operating out of Exeter Livestock Centre, believes building relationships is crucial to achieving these aims. “If vendors like and trust you to do a good job on their behalf, they will keep coming back, and if they come back, your market will grow,” he explains.

“Likewise, communicating with buyers is key, especially those travelling from afar. The aim is always to be personable and approachable to all buyers and sellers.”

Today, Russell operates out of Exeter’s large modern facility, which annually sells around 200,000 sheep, 6,000 pigs and 35,000 cattle. But where did Russell’s passion for the live sales ring begin, and how did he ‘land his dream job’ as an auctioneer?

“Having grown up on the family farm in South Devon, I went to market with my dad and uncle at every opportunity, and was mesmerised by the auctioneers,” explains Russell. “The interest grew and by the age of 11, I was regularly buying sheep and cattle for the family farm.”

It is perhaps a surprise that the next port of call for Russell’s story was to be North Yorkshire, but it was here that he was taken on as a junior auctioneer and fieldsman with Bentham Auction Mart, straight from the family farm.

Russell says, “At the time I had no training or qualifications, but I was able to study on the Livestock Auctioneers Association (LAA) auctioneering course at both Newton Rigg College and Harper Adams University, becoming a Fellow of the LAA.”

Now ten years into his career, 32-year-old Russell moved back to his South West roots and progressed to his current role as lead sheep auctioneer and director with Kivells. The business runs three livestock markets and seven estate agencies throughout Devon and Cornwall.

Married to Jessica, with two-year-old son Herbert, and another due in January, Russell and his wife farm over 200 sheep on the edge of Dartmoor, taking up most of his spare time outside of auctioneering.

But it is at the market where Russell will be most recognised. “Auctions are critical to the success of livestock marketing and the livestock industry going forward,” says Russell. “Supermarkets and abattoirs keep looking for ways to by-pass the livestock market, in a way to control what they pay the producer, sugar-coating it whichever way they can.

“The truth of the matter is, that livestock markets are the ONLY way to set a price. Provided there is real competition in a livestock market, a producer should have no reason not to use that market. Supporting the local market is key to everyone’s future.”

Kivells combines modern communication channels, with tried and trusted methods, to reach both buyers and vendors. “We appreciate a ‘one size fits all’ approach isn’t practical, some appreciate a phone call or farm visit and a catalogue in the post, while others prefer contact online, via their smart-phone or through social media. We communicate through all of these channels.”

It’s a progressive approach that attracts buyers and vendors to Exeter. “We have twice weekly livestock sales of prime/cull stock where I will sell anything between 1200 to 3000 prime lambs, hoggs and cull ewes. Our store markets on a Friday regularly get in excess of 2000 stores, while seasonal breeding sheep sales often number 6-7000,” explains Russell.

Speaking on his award success, Russell adds, “I felt very honoured to have been nominated for the Auctioneer of the Year Award, let alone to have won it. I will keep lifting the profile of Exeter’s sheep sales, and with that hopefully increasing throughput.”

Congratulating Russell, LAA executive secretary Chris Dodds, adds, “This is a richly deserved award, recognising Russell’s commitment to deliver the best results, with a focus on the importance of the livestock auction system.” 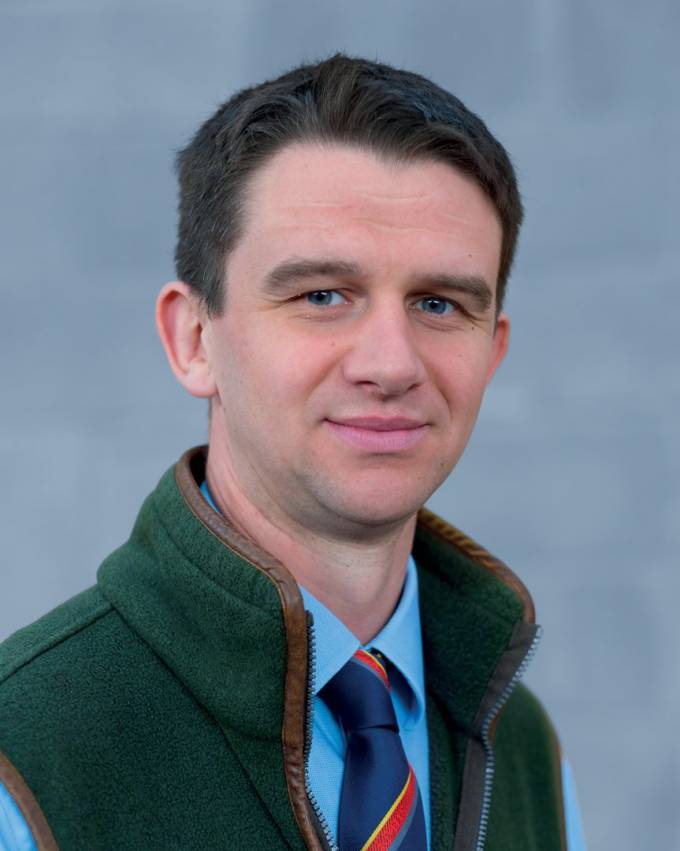